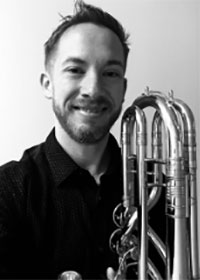 Director of BRASS and Assistant Professor of Music, Dewberry School of Music, CVPA

Dr. Alan Carr, bass trombonist, is the Director of Brass at George Mason University, effective August 2019. Previously, he was on the music faculty at Bates College, the University of Maine at Augusta, and Concordia University Wisconsin. Dr. Carr has performed with orchestras throughout North America, Europe, and Asia. He has worked with the Alabama, Baltimore, Dubuque, Hartford and Portland Symphony Orchestras, the Juilliard Orchestra, Ensemble Connect at Carnegie Hall, and the AIMS Festival Orchestra in Graz, Austria. As a chamber musician, Dr. Carr has performed and recorded with the American Brass Quintet, the Isthmus Brass Ensemble, and the King’s Brass. He can be heard on several recordings on the Albany, Naxos, Summit and Peer 2 record labels.

Dr. Carr performed at the 2016 and 2018 International Trombone Festivals and has also been an adjudicator for the Donald Yaxley International Bass Trombone Solo Competition. He has appeared as a guest clinician at Duquesne University, the Ohio State University and Ohio University and has been a guest soloist with the Concordia University Symphonic Wind Ensemble and the Madison Area Trombone Ensemble. Dr. Carr is an advocate for new music and enjoys working with composers to generate compositions for trombone. In 2015, he assembled the first-ever bass trombone consortium to commission the Kleinhammer Sonata for bass trombone and piano by John Stevens. The consortium commission is backed by musicians in the Atlanta, Boston, Detroit, Metropolitan Opera, National, and St. Louis Symphony Orchestras, among several others.

During the summer months, Dr. Carr is on faculty at the New England Music Camp in Maine where he teaches private students, coaches chamber music, and performs with his faculty colleagues. He is also a member of the Southeast Trombone Symposium Professors Choir which comprises trombone artists from major orchestras and faculty performers from across the United States. The STS Choir recently recorded a CD “Legacy” on the Peer 2 Record label. Dr. Carr is a founding director of Peer 2 Records, LLC.

Dr. Carr is a graduate of the Peabody Conservatory (BM), The Juilliard School (MM), Yale University (AD), and, the University of Wisconsin-Madison (DMA), where he was a Paul J. Collins Distinguished Fellow.