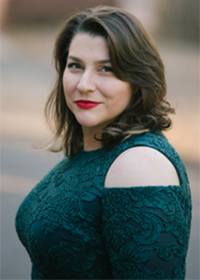 Noted by the Boston Globe for her “intensely lyrical” singing, soprano Elissa Alvarez is an equally enthusiastic interpreter of recital, concert, and operatic repertoire spanning early music to works of the twenty-first century.

Recent engagements include appearances with the Handel and Haydn Society at Tanglewood, in Boston at Jordan and Symphony Halls, and in New York City at the Metropolitan Museum of Art, in Bernstein’s Mass with the Brandeis-Wellesley Orchestra and Choruses, and as guest artist for both Tufts University’s New at Noon new music series and Bucknell University’s Debussy Centenary Symposium. Last season, she returned as guest artist at the Piano in the Arts Concert Series at Armstrong State University in Savannah, GA and in “The Ghosts of Weimar,” a cabaret performance at the University of Delaware. She also performed for “Una Voz, Un Mundo,” a celebration of Latin American song for Latin American Heritage Month in New York City, and reprised the voice of Anne Frank in James Whitbourn’s Annelies: The Diary of Anne Frank with the New England Classical Singers, a work she previously interpreted with Coro Allegro and the Handel Society of Dartmouth.

Alvarez is deeply devoted to the study and performance of Latin American art song. She completed her Doctor of Musical Arts studies at Boston University with her dissertation and lecture recital, “Pride, Place, and Identity: Jaime León’s Transcontinental Exploration of Identity Through Art Song,” a study of the art songs of Colombian composer Jaime León. She can be heard on CORO and Advent Press labels. Prior to joining the faculty of George Mason University, she served as Visiting Assistant Professor of Music at Bucknell University.