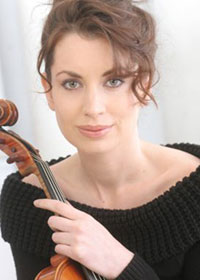 Praised for her versatility and creativity, American violist Renate Falkner leads an active career as an educator, recitalist, and orchestral and chamber musician, performing across the U.S. and abroad. Equally at home on both modern and baroque viola, she performs regularly with groups such as the Baltimore Symphony, Atlanta Symphony, Cincinnati Symphony, Jacksonville Symphony, and Artis-Naples, and is a former member of the New Haven Symphony Orchestra. As a baroque violist, she has performed with Boston Baroque, Tafelmusik, the Yale Collegium Players, and Baltimore’s Pro Musica Rara.

A frequent chamber music collaborator, Dr. Falkner is Artistic Director of the Charm City Chamber Players, an ensemble designed to highlight original repertoire and transcriptions featuring the rich, dark sound of multiple violas and cellos. Having a keen interest in chamber music featuring the viola in more prominent roles, she has been a guest artist with the Fontenay Chamber Players and also frequently collaborates with colleagues in trios for flute, viola and harp or guitar. She has shared the stage alongside such artists as violinist Erick Friedman, violist Jesse Levine, harpists Rita Costanzi and Kayo Ishimaru, oboist Joe Robinson, flutists Sergio Pallottelli and Rhonda Cassano, and guitarist Jose Lezcano. She has been heard in venues as diverse as the Metropolitan Museum of Art in New York and Yale’s Beinecke Rare Book Library, in orchestras at Carnegie Hall and Boston’s Jordan Hall, as well as forums such as the American Harp Society and the National Association of Composers, U.S.A. Summer appearances abroad have included the Verbier Festival, Switzerland, the Spoleto Festival, Italy, and a faculty appointment at the Carvalho Festival of Music in Fortaleza, Brazil. She also performs annually at the Bellingham Festival of Music in Washington. She has recorded for the Chandos, Nimbus, and Rezound music labels. An accomplished educator, Dr. Falkner received her undergraduate training at the Oberlin College and Conservatory, earning degrees in both viola and Ancient Greek, studying with Roland Vamos. She completed her graduate studies at the Yale School of Music as a scholarship student and assistant to the late violist Jesse Levine, and holds a doctorate from the Florida State University, under the direction of Pamela Ryan. Her treatise examining York Bowen’s viola music in the context of the English Musical Renaissance was the first to focus entirely on the composer’s compositions for viola.

Dr. Falkner is an active board member of the American Viola Society, where she is currently Chair of the 2020 AVS Orchestral Excerpt Competition and Seminar. After nearly a decade at the University of North Florida’s School of Music, she and her husband, cellist Steven Thomas, recently relocated to Baltimore. She joins the faculty at the George Mason University School of Music as an Adjunct Professor of Viola and also coaches chamber music through the Peabody Institute’s Preparatory Program.