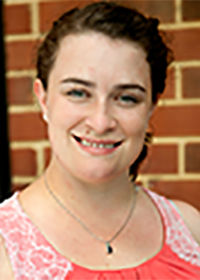 Kaity graduated from George Mason University with a Bachelor of Arts in Theater in 2011 and a Master of Arts in Arts Management in 2019. Kaity has been a part of the Acting for Young People team since 2008, working as a Teaching Artist in after-school, summer camp, and showcase programs, and as the resident stage manager for all of AFYP’s educational and touring productions. She also contributes to the day-to-day operations of AFYP as an Assistant Director of Outreach and Programs.

Kaity has an extensive background in the arts and education. She has taught children ranging from early childhood through high school levels for over eight years. In her time as a student at GMU, she participated in many stage productions as an actor, stage manager, and technician. Kaity served on the board for GMU’s producing group, the Mason Players, for three years, and co-founded GMU’s chapter of Alpha Psi Omega, the theater honor fraternity. She received the Chris Parsons Achievement Award for her work with the theater department in 2010. Kaity has also worked professionally as a stage manager in the Washington, D.C. metro Area.