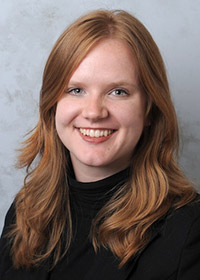 Adrienne comes to George Mason University with a wealth of experience working for both presenting organizations as well as artist-led ensembles. Most recently she was the Executive Director of Dance Heginbotham, a company she founded with Artistic Director John Heginbotham in 2011. Adrienne was integral in navigating the company’s rapid growth, supporting exciting artistic achievements while creating a solid organizational structure to support John's creative vision. Company highlights include presentations and commissions from prestigious institutions such as the Brooklyn Academy of Music, Jacob's Pillow Dance Festival, John F. Kennedy Center for the Performing Arts, and Lincoln Center for the Performing Arts; a six week tour to Southeast Asia with DanceMotion USA, a program of the U.S. State Department; and diverse collaborators with artists such as Alarm Will Sound, Brooklyn Rider, Joshua Bell, and Maira Kalman, among others.

Prior to her work with Dance Heginbotham, she was the Assistant Director of Programming and Audience Development at the Quick Center for the Arts at Fairfield University (2011 - 2013) and the Company Manager of the Mark Morris Dance Group (2005 - 2010), after getting her start as an intern at Jacob's Pillow Dance Festival in 2005.  She served on Dance/NYC’s Jr. Committee for two years, and continues to work as a consultant for independent artists and projects.