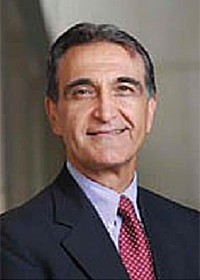 Anthony J. Maiello is Professor of Music and University Professor at George Mason University. Professor Maiello teaches applied lessons in Conducting, Aural Skills, and classes in Instrumental Conducting. From 1996 to 2009, he conducted the Mason Symphony Orchestra and Chamber Orchestra. Under his direction, the ensembles at both Crane and George Mason University commissioned new works, made numerous recordings and appeared at national and international conferences.

Professor Maiello also makes professional appearances both nationally and abroad conducting music festivals, adjudicating ensembles and presenting clinics, lectures and workshops throughout the United States, Canada, Mexico, the Bahamas and Europe. He conducted musical activities for the Gold Medal Ceremonies at the 1980 Winter Olympics in Lake Placid, New York; served as Musical Director for Music Festivals International; was selected as President of International Association of Jazz Educators – New York State Chapter; and is a guest clinician for Yamaha Corporation and Warner Bros. Publications. In March of 2010, he was inducted into the Bands of America Hall of Fame at Music for All’s Indianapolis headquarters.

Professor Maiello’s professional recording credits include conducting the American Wind Symphony and additional studio ensembles for Alfred/Belwin Publications. Locally, Maiello has served as Associate Conductor of The McLean Orchestra, McLean, Virginia; been appointed an Honorary Conductor of The United States Navy Band, Washington, D.C.; and was a participant in the National Conducting Institute with Leonard Slatkin and the National Symphony Orchestra in Washington, D.C., to which he has provided his services as a cover conductor.

Maiello received his Bachelor’s and Master’s degrees in Music Education from Ithaca College, Ithaca, New York in 1965 and 1967 respectively, and has extensive experience teaching in the public schools and at the university level. While at the Crane School of Music, Potsdam College of SUNY, Potsdam, New York, he served as a Professor of Music and Chairman of Performance, where he taught Advanced Instrumental Conducting, Applied Clarinet, Woodwind Techniques, Percussion Techniques and conducted the Crane Wind Ensemble.

Throughout his career, Maiello has published musical compositions for string orchestra and is the author of “Conducting Nuances” (GIA Publications, Inc.); “Conducting: A Hands-On-Approach” (Warner Bros./Alfred Publications); and co-author of “The 21st Century Band Method” (Warner Bros./Alfred Publications). In 2007, Maiello was awarded the title of “University Professor” by the GMU Board of Visitors, the highest rank given to Mason faculty members. Maestro Maiello is the founder and Conductor/Artistic Director of the American Festival Pops Orchestra, a professional ensemble in the greater Washington, D.C. metropolitan area dedicated to promoting and performing American popular music. The American Festival Pops Orchestra’s May 14, 2022 performance marked the beloved Maestro’s final performance with the orchestra, capping off 12 years of leadership.