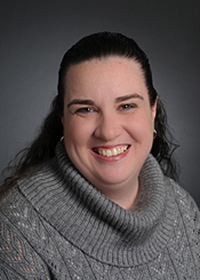 Carrie Ann Delaney earned her Bachelor and Master degrees in Music Education from the Aaron Copland School of Music at Queens College in New York. As an undergraduate, she performed as principal clarinet with the Wind Ensemble.  During her graduate studies, she performed as principal flute and Assistant Conductor of the Graduate and Directors Symphonic Winds,  under the direction of Dr. Richard Sang. In addition to her performances at the Aaron Copland School, she performed in the orchestra pits of various community theater companies in the New York metropolitan area.

Dr. Delaney earned her Doctor of Arts in Community College Education at George Mason University (2016) focusing on music education, conducting, and working with students with special needs. During her Doctoral studies, she had the honor of studying instrumental conducting with Prof. Anthony Maiello and Prof. Mark Camphouse. Dr. Delaney has served as an Adjunct Professor with the George Mason School of Music since 2008, teaching Popular Music in America, Introduction to Classical Music, and Music Fundamentals.

From 2002 to 2006, Dr. Delaney held the position of Elementary School Band Director for the Sayville School District in Long Island, NY. In addition to her teaching career in Sayville, she served as a co-chair for the 2006 Suffolk County Music Educators Association All-County Band Festival. She has also taught private woodwind instrument lessons in both New York and Virginia since 1995. Most recently, in addition to teaching at Mason, Dr. Delaney taught general music and band at a private Christian School in Northern Virginia. She also remains an active performer playing for various theater companies in Northern Virginia and singing or playing flute / clarinet for services at her church.