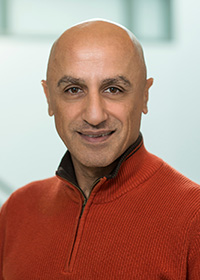 Born in Zahlé, Lebanon, Chawky Frenn lived his formative years in a country that nurtured him not only with paradoxes, conflicts, and delusions, but also with mysticism, spirituality and beauty. He emigratied to the United States in 1981. His preoccupations with mysteries on God and humankind, good and evil, fate and freedom have evolved into humanist concerns on social justice, human rights, political discourse, religious dialects, identity and gender issues.

Frenn received a BFA from Massachusetts College of Art and Design in Boston, MA, in 1985 and completed his MFA at Tyler School of Art of Temple University in Philadelphia, PA, and at Temple Abroad in Rome, Italy, in 1988. He taught at Bridgewater State College in Bridgewater, MA; Montserrat College of Art in Beverly, MA; and Edinboro University of Pennsylvania in Edinboro, PA. He is currently Associate Professor at George Mason University in Fairfax, VA.

Frenn is the author of two books 100 Boston Artists and 100 Boston Painters published in 2013 and 2012 by Schiffer Publishing. His work appeared in 100 Artists of Washington, D.C. by F. Lennox Campello in 2011, Male Nude Now by David Leddick in 2001, and Encyclopedia of Arab American Artists by Dr. Fayeq S. Oweis in 2008. Art for Life’s Sake is a monograph on Frenn’s work published by Fine Arts Consulting and Publishing S.A.R.L. in Beirut, Lebanon, in 2006.