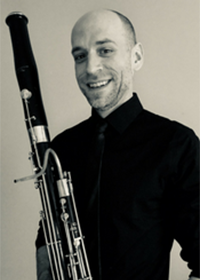 As a clinician and adjudicator, he has served as a judge for the Music Teachers National Association (MTNA) Woodwinds Competition and has presented masterclasses for the DC Youth Orchestra and at schools throughout the Washington, DC metropolitan area.  He has additionally taught masterclasses at James Madison University and the University of Missouri, and was honored to coach students at the Simon Bolivar Youth Symphony in Caracas, Venezuela, under Gustavo Dudamel.  Mr. Jewell coaches woodwinds for the Maryland Classic Youth Orchestras and at Bishop Ireton High School and has led sectionals at American University and Georgetown University.  He also maintains a vibrant private studio in Northern Virginia.

An avid chamber musician, he has performed at the Corcoran Gallery of Art, Georgetown University’s Friday Music Series, and the Kennedy Center’s Millennium Stage, and has been featured on WETA’s Front Row Washington.  He has also performed with ensembles at the International Double Reed Society and Texas Music Educators Association Conventions. Mr. Jewell earned a Bachelor of Music degree from the University of Missouri-Columbia where he studied with Barbara Wood and Edward Dolbashian.  He continued his studies at the Manhattan School of Music with Patricia Rogers, Principal Bassoonist of the Metropolitan Opera Orchestra.