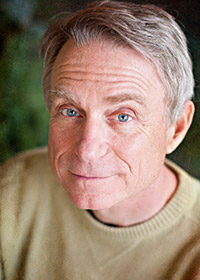 David Gaines, is a performer and director who has focused his work almost exclusively on telling stories in movement, mask, improvisation, commedia, and clown. He studied and later taught at the Ecole Jacques Lecoq in Paris, France, after which he was a founding member of The Moving Picture Mime Show – a movement theatre company based in London that toured Europe and the world for 10 years.

He holds a B.A. (Theatre) from Grinnell College, and a Diplome from the Ecole Lecoq. He has been a faculty member at the graduate school of the University of Missouri (Kansas City), and is now happy to be teaching at George Mason University.

As a clown, he is a member of the Big Apple Circus Clown Care Unit in Washington and Baltimore. As a writer and director, he has developed and directed shows for companies in England, in Paris, and in Salzburg. "He is the author of the chapter on "Full Face Masks, Pantomime Blanche, and Cartoon Mime" in the recently published Routledge Companion to Jacques Lecoq."

His two most recent solo performance pieces are: "A Little Business At the Big Top," performed at the New York Clown Festival, and "7 (x 1) Samurai," which has won awards and sold out at Theatre Festivals all across the country and the continent.