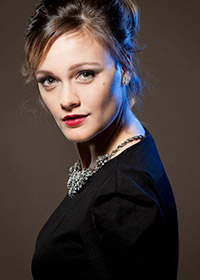 Erin Gardiner (B.M.from James Madison University) has taught the Musical Theater Workshop at George Mason University for the last three years and is co-director of the Mason Cabaret as part of Mason’s Musical Theater program. Mrs. Gardiner is an award winning professional actor, singer and teacher. Her Bachelor of Music with a concentration in Musical Theater is from James Madison University. For over a decade, Erin has worked professionally as an actress and singer in the D.C. area. Mrs. Gardiner has performed at Signature Theatre, Arena Stage, Ford’s Theater, The Kennedy Center for the Performing Arts, Olney Theatre Center and Round House Theatre. Recognitions include a Helen Hayes Award for Best Lead Actress in a Musical and the Roger Sturtevant Award for Outstanding Ability in Musical Theater. She has been a proud member of Actor’s Equity. In addition to her work in theater, Mrs. Gardiner also performs in solo cabarets and other concerts, and teaches private voice.

She studied vocal pedagogy under Kevin Wilson, Director of Vocal Pedagogy at The Boston Conservatory.