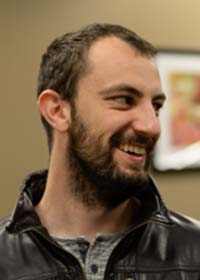 Jared Bruhn teaches game design courses in the Computer Game Design program, including Basic Game Design and Online and Mobile Gaming. His courses focus on the marriage of contemplative game analysis and hands-on workshop challenges. Bruhn has worked professionally and independently as a designer, programmer, and producer in game development. His team released a game that was recognized as a national finalist in Microsoft ImagineCup.