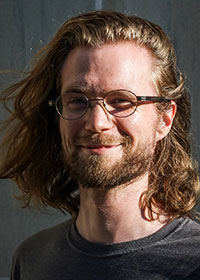 John’s compositions are influenced by a reverence of nature, a love of patterns, and the energy of minimalism. He currently divides his time between writing chamber works for ensembles of existing instruments and writing for original instruments and tuning systems he designs himself. His music has been performed across the United States by the Partch Quartet, the Grand Valley State University New Music Ensemble, Duo Atmos, chamber band Drive (J:), Decho Ensemble, the violinist Todd Reynolds, and saxophonist Jacob Swanson.

A strong advocate for new music, John has appeared at Strange Beautiful Music VI and VII in Detroit, Michigan with the GVSU New Music Ensemble, as well as accompanied the same group on four tours of the national parks—reaching twenty parks spanning the West Coast to the East Coast. In 2016 John co-founded Drive (J:), a chamber band from Fredonia, New York. With Drive (J:), John has appeared at the New Music Gathering in Boston, MA, and released two studio albums: places/spaces, and Phenomenology. As a solo performer, he has appeared at the New York City Electro Acoustic Music Festival and the Hot Air New Music Festival in San Francisco, California. John has also collaborated with Bang On A Can to restore Glenn Branca’s Movement Within, a piece for an ensemble of original instruments designed for a seven-octave overtone tuning. He worked directly with the original instruments, and the final product was performed live on WNYC’s New Sounds program.

As an instrument builder, John invented a 3rd bridge instrument called the duochord, a 9-foot-long amplified zither which allows the user to isolate string partials, and to generate clouds of reverberant harmonics. He is also one of the only builders of daxophones, and pick-behind-the-bridge guitars, little-known inventions by Hans Reichel.

In 2020, John founded JLJ Instruments, a company that produces experimental musical instruments. The company has shipped globally, with orders ranging from daxophones to microtonal guitars.