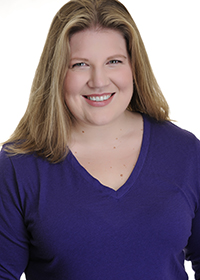 Mimsi Janis is an assistant professor in the School of Theater at George Mason University. She is also an actor and teaching artist in the DC area. She has performed with Studio Theater, Signature Theater, Washington Stage Guild, The Kennedy Center, South Dakota Shakespeare, NextStop Theater, Chesapeake Shakespeare, Maryland Shakespeare, and many others. Her play, The Wedding Party, which she co-wrote, won Best Comedy at Capital Fringe 2015.

Ms. Janis has been a teaching artist and educator for Acting For Young People for over a decade and taught middle school theater for Fairfax County Public Schools. Ms. Janis is a co-director of the DC Coalition for Theater and Social Justice, through which she has facilitated numerous Theater of the Oppressed workshops.

Ms. Janis holds a BA in Theater from Principia College, a M.Ed in Curriculum and Instruction from George Mason University, and an MFA in Acting from the Catholic University of America.