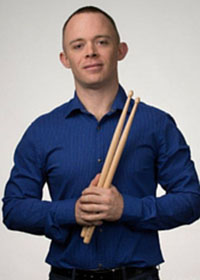 Shane Nickels is a percussionist specializing in rudimental and orchestral percussion. Shane currently serves in The United States Army Old Guard Fife and Drum Corps as a snare drum instrumentalist and as Adjunct Faculty at George Mason University. Before winning the job with the fife and drum corps, Shane also performed as a snare drummer in DCI and other professional groups including The Bluecoats, The Troopers, and the Kansas City Chiefs drumline. As an educator, Nickels was the battery instructor for The University of Kansas Marching Jayhawks for two years and has given numerous clinics to private studios, high schools, and colleges throughout the country.

In addition to rudimental percussion Nickels is an orchestral percussionist, having performed with the Debut Orchestra, American Youth Symphony, Kansas City Symphony Orchestra, and the Mariinsky Orchestra. He was also a fellow at Music Academy of the West studying under Mike Werner and Ted Atkatz as well as playing at the Tanglewood Music Festival.

Shane is a Tom Freer and Sabian artist.