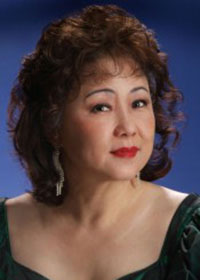 Dr. Mira Yang earned her D.M.A. Degree at The Catholic University of America, her M.M. from Peabody Conservatory, and B.M. from Ewha Womans University. She studied at Der Hochschule Mozarteum in Salzburg, Austria. She also attended Altenburg Academy in Germany; Societa dei Concerti in Italy; AIMS in Graz, Austria; the Minnesota Opera Center; Dicapo Opera and the Shaker Mountain Festival.

Dr. Yang taught at the JCC (Jewish Community Center) school of music in Rockville, MD,  the Musical Theater Center from 2004 to 2010, and the Potomac School in McLean.  She is member of the NATS (National Association of Teachers of Singing), NOA (National Opera Association), and CMS (College Music Society).

Currently, she is professor of voice in the school of music at the George Mason University and Community Advisory Board member for the Kennedy Center.

“An enchanting light-hearted Papagena from Korea.”

“The evening was a delightfully agreeable meeting with MIRA YANG.”

“Brisk and enjoyable with good singing by MIRA YANG.”

“A wonderful, unique voice in that it has coloratura range and flexibility, but also has exceptional strength throughout.” – The Washington Post