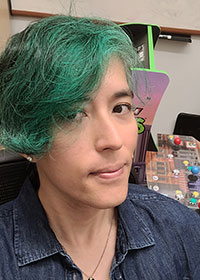 Robbie Dieterich has a BS in Computer Science from the College of William and Mary and an MA in Computer Game Design from George Mason University. They are a 10 year veteran of the games industry, the majority of their career being at iNiS Corporation in Tokyo, Japan. They are an expert game programmer with experience in PCs, consoles, and mobile devices and are fluent in Japanese. Games they have worked on include Gitarooman Lives (Sony PSP), Elite Beat Agents (Nintendo DS), Lips (Microsoft Xbox 360), The Black Eyed Peas Experience (Microsoft Xbox 360 + Kinect), Infinity Blade Cross (iOS), Eden to Green (iOS and Android), Ookibloks (PC), Robot Legions Reborn (PC), and Coup (Android).