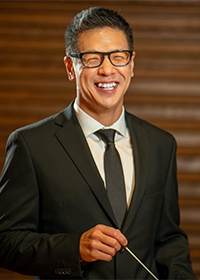 Dr. Soo Han is the newly appointed Director of Orchestral Studies at the Reva and Sid Dewberry Family School of Music at George Mason University. He is also the Music Director of the Elkhart County Symphony Orchestra and a member of the Board of Directors of the Midwest International Band and Orchestra Clinic. In addition, he is a contributing editor for Hal Leonard’s Essential Elements for Strings, a D’Addario Orchestral Strings Artist, a Conn-Selmer Educational Clinician, and a program coordinator/faculty member with the Los Angeles Philharmonic’s summer Youth Orchestra program.

An active conductor, Dr. Soo Han has appeared with professional orchestras throughout the country in addition to directing university orchestras. He is a frequent conductor for All-State, Regional, and Honor Orchestras throughout the U.S., appearing in over 30 states. He has also conducted internationally with orchestras in Austria, China, Thailand, and Australia. Dr. Han has collaborated with numerous artists, groups, and conductors such as Lynn Harrell, David Kim, and the Indianapolis Symphony Orchestra. He has produced multiple recordings of complete symphonies and has premiered several commissioned works for strings and full orchestras. He has presented workshops and clinics internationally and for national and state music conferences including the Australian String Teachers Conference, Maryborough National Australia Conference, Midwest Clinic, American String Teachers Association (ASTA) National Conference, NAfME National Conference, and the Ohio University Summer String Teacher Workshop.

Dr. Soo Han is a co-author, contributor, and managing editor for Teaching Music through Performance in Orchestra, Vol. 4, one of the leading orchestra pedagogical resources published by GIA. He is the past president of the Indiana chapter of the American String Teachers Association; the Indiana chapter was awarded the ‘Most Improved Chapter’ during his time as president. Having taught music in public schools for fifteen years, he is a passionate supporter of public school music programs and continues to remain active in instrumental classrooms throughout the country.