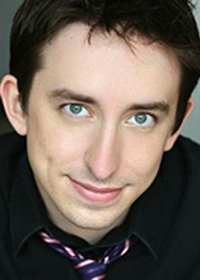 James Gardiner, (B.A. University of Maryland - College Park) is a professional actor and playwright. He wrote the book for Glory Days, which premiered at Signature Theatre in Arlington, VA and transferred to The Circle in the Square Theatre on Broadway. At the age of 23, he was one of the youngest librettists to have his work produced on Broadway. Mr. Gardiner's work has been produced commercially in Tokyo, Japan and has appeared regionally throughout the United States and Canada. As an actor, he has appeared at The Williamstown Theatre Festival, John F. Kennedy Center, Signature Theatre, Ford's Theatre, Studio Theatre, Olney Theatre Center, Round House Theatre, Folger Theatre, and Everyman Theatre. He is a proud member of Actor's Equity Association and The Screen Actors' Guild.