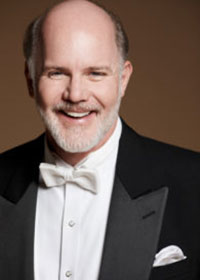 Kerry Wilkerson made his Carnegie Hall debut in June 2017 to rave reviews as baritone soloist in the Vaughan Williams Sancta Civitas. His solo career has taken him up and down the east coast performing renowned oratorios and exciting recitals. A resonant singer with unique evenness in register, the Washington Post has described him as an ‘exuberant’ performer having the ‘amber tone of a lyric baritone with the imposing weight demanded by Handel’s low-lying writing’.  He recently retired from an esteemed career with the United States Army Chorus; singing and conducting for world leaders, Supreme Court Justices, politicians and dignitaries of many nations during official ceremony and protocol events.

In addition, Kerry has sung professionally with the United States Air Force Singing Sergeants and the critically acclaimed Robert Shaw Festival Singers in many of the most prestigious concert halls throughout the United States and Canada. Kerry is well known to Washington, DC audiences through his solo recitals and regular guest appearances with choruses and orchestras including The Washington Chorus, the Handel Choir of Baltimore, the National Philharmonic Chorale and Orchestra, City Choir of Washington, Choralis, and the Oratorio Society of Virginia. Recent performances as featured soloist include Dvorak’s Stabat Mater with the North Carolina Master Chorale, Vaughan Williams’ Dona Nobis Pacem with the Air Force Symphony Orchestra, Vaughan Williams Five Mystical Songs with the American University Choirs, Messiah with the La Jolla (CA) Symphony, Rachmaninoff The Bells with Spokane (WA) Symphony, Mozart’s Requiem with City Choir of Washington, Duruflé’s Requiem with The Washington Chorus and Mendelssohn’s Elijah with Choralis. The 2019/20 season includes appearances with The Washington Chorus in Mozart’s Requiem, the National Philharmonic in Einhorn’s Voices of Light, the INSeries as King Herod in L’Enfance du Christ and the featured soloist in the world premiere of Kohelet, a new work by Washington, DC based composer, Henry Dehlinger, with the Santa Clara (CA) Chorale.