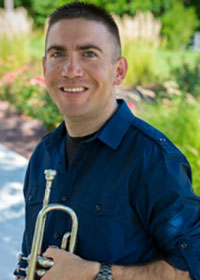 Dr. Kevin Gebo is an internationally performing trumpeter as well as a freelance musician and soloist in the Washington Metropolitan Area. Dr. Gebo frequently travels as a guest performer and clinician to universities and festivals and has been on faculty at Virginia Commonwealth University and West Chester University as Adjunct Professor of Trumpet.

He has performed with musicians and ensembles such as Andrea Bocelli, Idina Menzel, and the Brass Band of Battle Creek, and can be seen frequently performing with the Washington Symphonic Brass, Harrisburg Symphony Orchestra, National Symphony Orchestra and the Kennedy Center Opera House Orchestra.

His performances have taken him all across the country as well as performances in Canada, Austria, Australia and Germany. He was the principal trumpet on the Naxos recording of William Bolcom’s “Songs of Innocence and Experience” which won four Grammy awards including “Best Classical Album”.

Some of Dr. Gebo’s most memorable experiences have been performing in the Inaugural Parade for President Barack Obama and for Pope Francis’ Papal Mass during his visit to the United States. Dr. Gebo was invited by Julia Fordham and Paul Reiser to perform as a featured guest on “The Tonight Show with Jay Leno” on their hit single “UnSung Hero”.

Dr. Gebo is currently a Staff Sergeant in the United States Army. He plays Pickett mouthpieces exclusively and is a Yamaha Performing Artist.