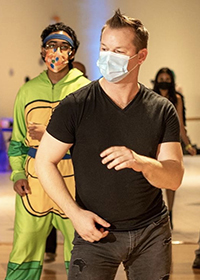 Paul Cassens is a principal dancer with the D.C. Casineros, a role which has given him the opportunity to perform, teach, and choreograph with the company throughout the United States and abroad. Like many of his Casineros family, Paul was introduced to Cuban music, dance, and culture by Jim Lepore at George Mason University. In 2018 the group was invited to give a concert at the Kennedy Center as part of their Artes de Cuba festival, which was streamed multiple times on the island. A frequent traveler to Cuba, Paul has had the opportunity to perform there multiple times since his first trip in 2012.  In addition to his responsibilities with the Casineros, Paul is an instructor with Azucar, the GMU Salsa Club - where he was first introduced to Rueda de Casino by Digna Rodriguez, and faculty in the School of Dance where he teaches World Dance courses and is a percussionist.  With a background in music, Paul received his BA from George Mason University studying under John Kilkenny and Ken Harbison, and pursued graduate studies at the University of Utah.