Behind the Premiere: The Making of the Black Voices Screening Project

Students in the College of Visual and Performing Arts are empowered to share their stories through the arts. In April 2021, three students from the School of Dance partnered with world-renowned choreographer Rafael Palacios to explore, express, and share their experiences as Black women through movement.

The project was born from a desire to sustain connections during the isolation of lockdown in 2020 when Palacios reached out to the dancers from his Colombian-based company, Sankofa Danzafro. He asked them to write letters about “their stories, their experiences, things that they felt they have been silenced for.” Founded by Palacios in 1997, the company’s work centers on rewriting the history of Black communities through the eyes of those who are directly involved, the Afro-descendants, in Colombia and around the world. Shortly after the dancers began to document their stories, a call for creative works that could be presented online came from their government. Palacios asked his dancers if they would be willing to “translate those letters into movements” and the company then created 26 videos of individual dances, including one from Palacios himself.

Inspired, Rafael decided to bring the Black Voices project to other communities to explore this idea of expression and release, first in Boston (billed as Black Voices Boston) and most recently through the Mason Arts at Home. Palacios sent an open call into the Mason community for students who identified as Black, African American, Afro Caribbean, Continental African, Afro European, Afro Latino, Afro Hispanic, Afro Asian, Afro Australian, or Mixed race with one parent who identifies as Black to apply. The only requirement was that participants be willing to write letters and share their own stories through movement or other art forms, and School of Dance majors Brianna Dawkins (Class of 2024), Carmella Taitt (Class of 2022) and Olivia McCall (Class of 2021) seized the opportunity.

Given the travel complications caused by the pandemic, Palacios had to participate in the rehearsals and creation process remotely via Zoom. This coupled with the incredibly personal and vulnerable nature of the work meant that everyone involved in the project was determined to construct both a technologically equipped and emotionally protected space.

“It was paramount that we as a team recognized the gift that our students were offering,” shared Haley Smyser, Programming and Engagement Manager for the Center for the Arts and the College of Visual and Performing Arts. “We were absolutely intentional about who was allowed to be in the room so that there was no pressure to feel censored or criticized by people who could not relate to the experiences these dancers were tapping into.”

Smyser added that, as Mason continues our work towards anti-racism and inclusive excellence, “We can further enrich the experiences and learning environments for our students by considering the depth of the connections that are possible and made available with these professional artists, in addition to the width of their impact when they share their work with our audiences both on and off-campus.”

At the end of the rehearsal process, conducted over Zoom using The LIVE Center Window Wall technology developed at Mason, each student choreographed their full piece in collaboration with Rafael. Acting as their own creative directors, the dancers selected the spaces on campus where they would perform and record their works, then directed the editing of the raw footage into the films that premiered on May 7 on Mason Arts at Home. Taitt edited her own work, and Dawkins and McCall were supported by alumni and student editors from Mason’s Film and Video Studies program. 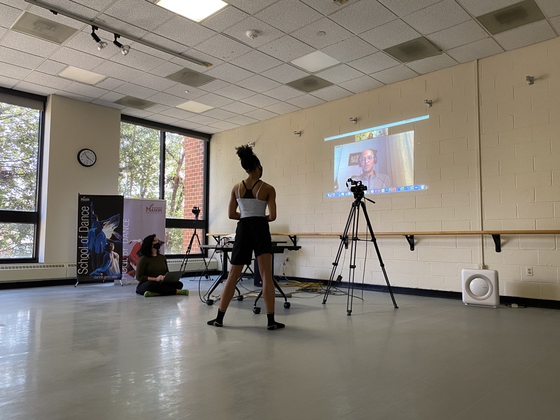 “The hardest part about the entire process was coming to terms [with the idea] that it was a collaborative process,” confided Dawkins. “Instead of the choreographer telling me what to do, because as dancers that is what we’re used to.”

McCall concurred, saying that her biggest challenge in the process was setting choreography [on herself]. She shared, “When you’re dancing by yourself, it’s easy to improvise or just do what you want to do in the moment, because it’s just you, you don’t have to worry about anyone else.”

Faculty mentor Setarra Kennedy, Assistant Director of the Arts Management program and adjunct professor in the School of Dance, wore many hats during the rehearsal and production process, from company manager to sounding board, coach, and videographer. While in the rehearsal room, Kennedy kept to the background, recording notes and feedback as Palacios, his translator, Monica Delgado, and each dancer worked together to develop the movements of their pieces.

The resulting dances are eye-opening, powerful, and courageous, a testament to the willingness of these students to explore their personal lives through their professional art. The emotional power of these performers is clearly evident in each of their works: “Becoming,” “On View,” and “Hear Me As I Am".

Reflecting on the experience, Palacios said, “I would just like to reiterate my deepest gratitude for amplifying and sharing my vision of the world through dance, a world that becomes smaller thanks to the mutual interest in knowing each other not as foreigners or strangers but rather as who we really are; diverse and valuable humans in distant and common lands at the same time.”

Dawkins shared that she’s “excited to continue choreographing” as part of her studies in the School of Dance, as she was a freshman during this project. Taitt, who will begin her senior year in Fall 2021, said that as a result of this experience, “I find it important to incorporate my Black voice into whatever I create so that I can fill spaces with my purpose and be able to represent my community.” McCall concurred, noting that as she moves into her professional career, “it’s important for me to also incorporate my own Black movement and voice into all the choreography that I do.”