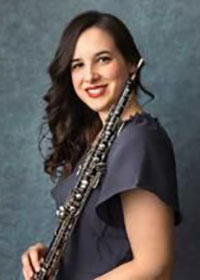 Originally from Newark, Delaware, Emily Foster joined The United States Air Force Band in Washington, DC in 2013 and was appointed as Adjunct Oboe Faculty at George Mason University in 2019.

In 2007, Emily joined the Philadelphia Youth Orchestra and studied at the prestigious Settlement Music School. She performed as principal oboist with the Philadelphia Youth Orchestra at the Kimmel Center for the Performing Arts and during their tour of São Paulo and Rio de Janeiro, Brazil in 2007. In 2008, she was the winner of two concerto competitions and was featured as a soloist performing Marcello’s Oboe Concerto in C Minor with the Kennett Symphony and Newark Symphony Orchestra. In addition to solo performances, Emily has participated in the Banff Music Festival, Texas Music Festival, Boston University Tanglewood Institute, and the National Repertory Orchestra.

In 2013, Emily received her Bachelor of Music degree in Oboe Performance from Rice University studying under Houston Symphony principal oboist, Robert Atherholt. Prior to college, she studied with Jonathan Blumenfeld and Lloyd Shorter.

An active freelancer, Emily has frequently performed as a guest artist with the Washington Concert Opera, Fairfax Symphony Orchestra, Tyson’s McLean Orchestra, and Kennedy Center Opera House Orchestra. Also an avid chamber musician, Emily is the oboist in a reed quintet, the Atlantic Reed Consort, and made her Carnegie Hall debut with them in January 2017.